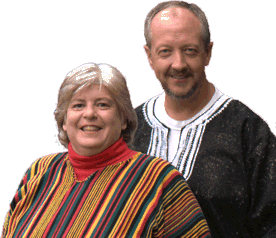 Liberia, Nigeria, Kenya, South Africa and now back in the USA...

We left for Liberia, West Africa in August 1989 to join the work at the ELWA radio station complex operated by SIM. Dwight worked with the services department of ELWA, specifically working with generator control systems and general electronics. Dorothy used her teaching skills to tutor at the ELWA school for missionary kids in grades 1-8. She also taught literacy to Liberian women. Because of civil war, we were evacuated in 1990, Dorothy and the children in May and Dwight in July when ELWA was overrun by rebel fighters. When we returned to Liberia in 1991, Dwight was the business manager and Dorothy was the only teacher for the 8 missionary kids in 7 different grades. Once again war erupted and we were evacuated in October of 1992. We then spent 3 ½ years on SIM USA home staff in Charlotte – Dwight in computers while Dorothy worked primarily in personnel.

In 1996 the Lord called us back overseas to Nigeria and we spent the next 7 years in a variety of support roles for both SIM Nigeria and Hillcrest School, a cooperative mission school where our children attended.

In 2005 the Lord again moved us further east and higher in elevation, this time to Kenya. Our task was to start a short term program of excellence. Dorothy set up and ran the short term missions program called SIMPact, initially with Dwight’s help before he moved on to media and projects. In 2007 Dwight became the SIM Kenya Area Director and Dorothy added Personnel Coordinator for career missionaries to her SIMPact responsibilities.

During Dwight's tenure as the SIM Kenya Area Director, new mission and vision statements for SIM Kenya were developed. The governance structure of SIM Kenya was updated. The individually oriented ministries were pulled together into ministry teams and additional ministry locations were identified and action taken to place missionaries in these places. During the latter time in Dwight's five year term as Director, Dorothy handed the supervision of the SIMPact program over to others as the role of the Director’s wife became more demanding.

Upon completion of the five year term as director, Dwight moved back to filling a media role for SIM Kenya. Dorothy has been involved in literacy, leading Bible studies and is taking on a ministry of being available to the many new missionaries on our field. We have also taken on greater roles in our local church with Dwight being an elder and Dorothy looking to help in an administrative role.

The Lord still had another African chapter for us. SIM Southern Africa (SIM SA) asked us in January 2015 if we would consider moving to Cape Town, South Africa so that Dwight could take on an much needed administrative role within the SIM SA office. After much prayer, the Lord confirmed for us that the move was His next plan for us. We sold most of our belongings in Kenya and after a lengthy wait for our visa, moved to Cape Town at the beginning of September 2015.

Dwight’s responsibilities focused on creating a well-functioning office team, while Dorothy helped with governance training, the new ministry initiative: Isaiah 6.8 and doing editing work for SIM SA publications. With the diagnoses of pulmonary arterial hypertension for Dorothy, we returned to the USA in order for her to receive specialized medical attention that was not available in Africa.

Dwight is currently ministering on the SIM USA Home Staff working with the Information Services group.

We both grew up in Christian homes, Dwight in rural North Dakota and northwestern Minnesota, and Dorothy in Minneapolis, Minnesota. We met while attending the same university in 1974 and married in 1980. While living in Bloomington, Minnesota, our son, Josh, was born in December 1983 and twin daughters, Jessica and Rebeka, were born three months premature in September 1984. Due to multiple infusions of blood and having blood taken for tests while the girls were in an intensive care unit, Jessica contracted the AIDS virus. She died in October 1986, shortly after the girls’ 2nd birthday. While this was a very difficult time in our lives, we were incredibly aware of how God had prepared us through discipleship from neighbors and provided a great support system of family and friends to help us through this trial.